DOUAR [dwa:R]: The village in Arabic, earth in Breton.
Just like these two words, which allows expressing yourself in two languages, DOUAR Trio draws on the land of musical traditions inventing a modern and aerial oriental jazz, as it weaves a link between culture and people. This is a deeply acoustic music, without artifice, in which the richness of the instruments’ tone can be revealed as well as sounds made by air and wood can be together.

Touched by the music of Anouar BRAHEM, Henri TEXIER, Avishai COHEN and many other artisans of musical blending, they create together an acoustic space without artifice in which the richness of the timbres of their instruments can be fully expressed, combining their sounds with a mix of air and wood. Through inner melodies and hypnotic loops, improvisations and dance rhythms, DOUAR Trio‘s music unfolds its stories as if in a tale without words, letting the language of the instruments express itself.

We then embark on an intimate journey, full of sincere emotions and from which we return with the memory of an elsewhere but also with the strange feeling of having found ourselves. 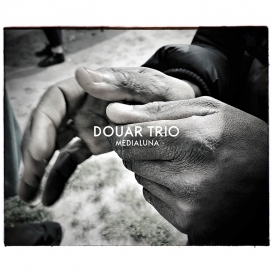 After a first EP and several dozen concerts, the trio’s sound— made of wood and strings, air and soft velvet — explores 12 compositions thanks to Johan Caballé’s magnificent sound recording. Built like a lunar cycle, Medialuna bathes us, by its twilight light, in a dreamlike setting where inner songs, stories without words and ritual dances mix.

In this recording, the Douar Trio pledges the desire to play its music in harmony with human souls.