Crimi is a matter of trickling soul, a certain notion of the oozing groove, like the porous raï creations derived from all influences or the catchy funk of New Orleans, while maintaining important tones of a more melancholic style.

Crimi is above all a personal story, of a kid raised in Lyon whose Sicilian grandmother hummed time-honoured songs. This theme is a key element in the formula that, saxophonist and singer Julien Lesuisse, likes to call soul of Sicily. This explains why it is possible to hear oriental tones, a lyricism at the height of the voice reflecting his time in Oran with Mazalda.
Crimi is also a desire to revive traditional aspects running through original songs, well-crafted melodies carried by the sound of the band, of an unlabelled genre. This traditional-modern band is at the same time very structured and very free.
Luci e guai is Crimi’s debut album released by Airfono Records in March 2021. “Light and muddles”, this title has programmatic value and it suggests that nothing is ever as simple as it seems, in words as in music. In other words, the perfect framework in which to connect all the threads that weave the complexity of a personality, from jazz to ballad, from the day before yesterday to tomorrow, from here and elsewhere.

SONGLINES **** – Robert Rigney
“They do succesfully convey something of the Mediterranean immigrant blues that this album is steeped in.”

BANDCAMP DAILY – Megan Iacobini De Fazio
“Like the raï musicians of the 1920s, who rebelled against conservative norms by mixing traditional melodies and rhythms with electric, Western-style instrumentation, Crimi re-imagine classic Sicilian songs through a wider lens, transcending the boundaries between various cultures, genres, and eras.”s.” 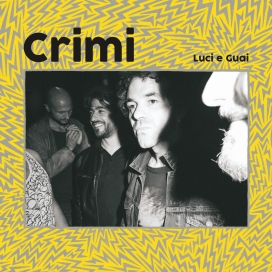 “Luci e guai, the first album released by Airfono in April 2021. The track, ‘Light and confusion’, has a procedural quality and seems to say that nothing is ever as simple as it seems, in language as well as in music. In other words, this song is the perfect way to weave together all the threads tha make up the complexity of a personality, from jazz to song, from the day before yesterday to tomorrow, from here to elsewhere.” Jacques Denis

Listen to an extract